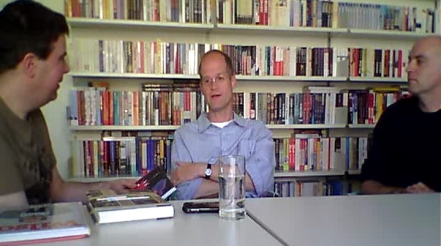 Continuing Panel Borders’ month long look at depictions of Masculinity in American Comics, Alex Fitch talks to award winning graphic novelists Chris Ware and Daniel Clowes who both publish their work first as chapters in periodicals Acme Novelty Library and Eightball respectively. Ware’s graphic novel, Jimmy Corrigan, the Smartest Kid on Earth, won the Guardian First Book Award in 2001, while Clowes’ Art School Confidential and Ghost World have both been adapted as American Independent films, the latter seeing the author nominated for his Best Adapted Screenplay at the 2002 Academy Awards…

As part of their ‘First Fridays’ events, Marine Studios in Margate are putting together an exhibition that looks at comics, graphic novels and sequential art.

Featuring work from a range of local and international artists and writers, live talk from guest speaker Paul Gravett, more comics than you can stand, and the chance to discuss your work and ideas.

To kick start proceedings prior to the show they are inviting submissions for a two page comic under the title: ‘Mechanical Elephant’. All ideas are welcome to inspire, amuse, terrify and entertain. There are no limits other than sticking to the two page rule (206 x 280 mm each, in either portrait or landscape), and of course, don’t forget the Mechanical Elephant!

The deadline for entries is 21st January 2011. Marine Studios will display the finished artwork and as much of the preparatory work as possible in their show beginning 4th February 2011 at Marine Studios, Margate.

Ilya: British comic book writer and artist.
Creator of Bic who appeared in a self-published series of comics (now collected as Skidmarks). His first (not graphic) novel The Clay Dreaming was published in 2010.