The art of P.J. Holden 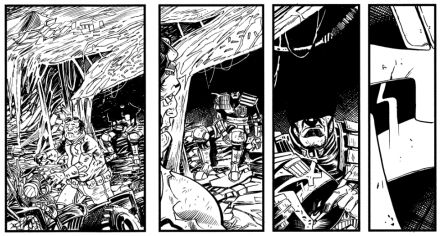 Excerpt from a Judge Dredd strip by P.J. Holden and Gordon Rennie

A special online exclusive episode of Panel Borders – in an interview recorded at Oxford’s Caption comic book festival in 2010, comics journalist Matt Badham talks to 2000AD artist P.J. Holden about his work, from his formative years combining art and computers to getting his first Judge Dredd assignment and his most recent projects.

For more info about this podcast and a variety of formats you can stream or download, please visit the home of this episode at www.archive.org

Read Alex Fitch’s article about Caption in The Oxford Journal

Links: P.J.’s website
Matt Badham’s blog
Caption website
2000AD online
Listen to the companion podcast to this interview in which P.J. talks to Matt about his formative years in Belfast and Alex Fitch talks to Al Davison and Will Morgan about Caption

Do you enjoy telling tall tales or scribbling stories? Do you love reading graphic novels, comics or picture books? Then look no further!
londonprintstudio is offering five carefully chosen 21-25 year olds the chance to:

-Run comic workshops for 16-20 year olds.
-Receive mentoring from top professional comic artists, anthology makers, screenwriters, print makers, comic publishers and art educators.
-Develop your own artistic comic projects with supervision from mentors and feedback from your fellow interns..
-Be introduced to the London comic scene, attend events, give presentations, network and meet publishers, editors and creators in the comic industry.
-Take part in editing, planning and creating work for a comic anthology publication and a comic exhibition at londonprintstudio.

The course is run by professional comic creator Karrie Fransman whose comics have appeared in The Times, The Guardian and who is currently working on her first graphic novel due to be published by Random House.

2 days (14 hours) per week for a six-months. Interns will receive a travel and food expenses budget for two days per week. All londonprintstudio staff and volunteers are required to have a Criminal Records Bureau Check.

Gosh! Comics have outgrown their happy home of 25 years and are moving to new, bigger premises in Soho!

To celebrate the opening of Gosh! Comics’ new store on Berwick Street and the opening of their new gallery space, the first event in the new premises is a signing and exhibition by celebrated comic book artist Dave McKean of his new graphic novel Celluloid.

Dave McKean will be signing at Gosh! from 2pm ‘til 4pm on Saturday the 6th of August. The exhibition runs until the 6th of September.

Then on the following week, acclaimed indie comics creator Luke Pearson will be launching his new title Everything We Miss, a book about the breakdown of a relationship and the infinitesimal events we would notice if our attention wasn’t directed elsewhere.